This is the second CD by Antonio Simone that I got to hear. Without doubt, he has created the same kind of magic that he created with Life Colors.

This review also is due long as I could not spare the time to do justice to it given that my wife delivered a baby girl a few months back. But anyways, I am here to express my views about the album. 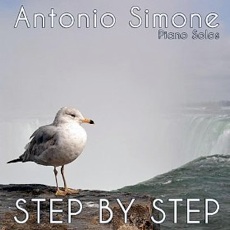 Piano music, as I understand it, requires a bit of attention if you want to review it. So, I have tuned myself once again (I listened to this album earlier many a times) to the songs. Straightaway, I would say that the music of Step by Step brings various colors to you. Reflective, moody and joyful–it has all the colors.

If ‘Away Down the River’ brings a bit of tempo to the listener, ‘Until I say Goodbye’ binds you as if it refuses to say the final parting word. It is the dexterity of Antonio’s fingers that holds the same keys but produce the notes at different time intervals to bring out the desired mood.

‘Step by Step’, the title song again brings a lot of joyful colors.

This is where I would say that Antonio has put a good work–varying the moods of every piece and doing justice to its name. The very next piece ‘Perspectives’ is a reflective one and you can think gaze towards the horizon while you take a thoughtful reverie.

Overall, I just loved the album and congratulate Antonio for bringing such a good collection to the musical world. Thanks are also due for sharing the album with me.

Wish him success and musical blessings for his future work!

Team NMA 2 months ago
“Homecoming” — Album Review: Celebrating The Reunion With Our Original Self 5 min read

“Homecoming” — Album Review: Celebrating The Reunion With Our Original Self

“All the Best Returns” – Album Review: Music Is Soul’s Companion

Team NMA 4 months ago
“Wondering” – Album Review: A Companion You Can Always Trust In 5 min read

“Isle Of Shadows” – Album Review: Mesmerizing Piano Melodies To Accompany You On Your Romantic Voyage

“ALWAYS” Album Review: Music To Tune The Soul On Its Voyage