“The songs of this album speak so many places I’ve never been. There was no master plan to capture these worlds in song. Yet I know that if I were to visit, my music would be welcomed with a smile, an embrace and with love.

My hope is that these songs arrive before I do, opening doors that never would have existed without the sound of my horn.

If I am fortunate enough to play for you, know that what you’ll hear is True.”

The red of the above statement truly gives the idea of how shining the truth can be. However, to capture the truth in music is one thing that you would be inclined to listen to. I was! I can categorically say that I was not disappointed rather would allegorically say that I could float to those places mentioned in the songs that are so True. 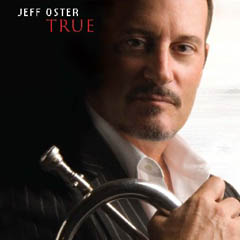 William Ackerman, like we know, has that uncanny noticing ability that can recognize the genius in any artist. In Jeff Oster, he spotted something similar and they combined to create a lovely collection.

I was sitting in my office when I wrote this review plugging myself to the head-phones and enjoying the music as I wrote. However, the deep impact that the notes carry took my inner self to the sojourn of those places mentioned in the songs. I was able to locate myself called by a higher-self with a clarion call of the Flugelhorn. “Saturn Calling” marked the ascent to a place where I could stand tete-a-tete with my own real self. The call of the flugelhorn was distinct and clear.

As I landed there, a serene ambience surrounded me as I was asked to explore This Place. The piano and the Logic Pro Keys looked to arouse a genuine appreciation of the place where I can roam around with my arms wide open and marveling the beauty of the place. The tempo of the song is literally capturing.

As I enjoy the tranquil nature of my new habitat, I am suddenly exposed to the wild and wide variety of Serengeti. Serengeti often takes you to a realm where nature displays its variety and creative power. It is like the state of our own mind where we have to tame the lions of wild passions and bring ourselves in sync with the order of the nature. The African taste through the vocals nicely adapts in the song. Before you feel lost, the sound of the flugelhorn returns to assure you that you are being watched over by your Caller.

The scene has changed. After the ruthless expedition to the landscape of Serengeti, there is something comforting. Violet is a color traditionally associated with nobility. The song like the color conveys a feeling of elegance and warmth. The Cello and the guitar gives marvelous effects to the piece.

As I feel secure, I am taken to the folds of Tibet-an sounds where my inner being is expected to dance in meditative joy. The tempo has picked up and so does my mood.

As my being settles in the new place, mixture of sounds claim the arrival of a new beginning. I feel accustomed to my this place and something new awaits my concern. It Sounds Like Sunshine. The song brings the peace of early morning when birds have flown for their chores to the far-off places. Once again, that floating effect of sounds comes into effect. It feels like as I can enjoy the new dawn of wisdom in me. It grows stronger (louder) and stronger as I begin to feel it.

After enjoying the auditory ride of the sunshine, I am back to enjoy the moonlight and its calming effect. Once in a Blue Moonlight brings me closer to my real self. The piece is really interesting as it portrays a conflicting struggle between the outer distractions and inner calls of the listener.

As the inner calls win, I am On One Knee. My inner self has realized and felt the peace it longs for. It has known how to relish the inner calls while still wrapped by the clamorous calls of the outer world. In the contemplative mood of the flugelhorn, my inner self kneels before my higher self, which has deigned to let me know who I am. The pauses in this piece literally give you the time to talk without any sound.

From the Dreamtime clearly lets you descend from your journey. The starting notes aptly depicts the sounds of steps. The flugelhorn starts as if the conch awakens you from your dream and you begin to wonder–is this True or that True? (A classic question posed by King Dasaratha, the physical father of Lord Rama). It is the perfect second-last piece of an album that took to a ride and now brings you back to your physical state.

What can an Indian listener ask more than getting the ability to come back to Mumbai. Metaphorically, it is coming back home from where I started (though I am sitting in Delhi, right now). But the song catches the spirit of the joyous return from the planes of self-realization. It is a mixture of rendezvous and victory.

Without doubt, Jeff has been able to take the listener to a journey, a journey that is True in all its beliefs and declarations. A genuine listener can easily pick the spiritual connection of this album.

A great thanks is due to Jeff for allowing me to tune to his wonderful music and write about it. I wish him love and peace and pray to God to continue blessing Jeff with such a lovely ability of sound creation. Creation, as they say, comes from the Creator itself.

1 thought on “CD Review of True by Jeff Oster”

“As The Crow Flies” – Album review

Team NMA 3 weeks ago 2
“Tale of the Oakenwish” – Album review: Traversing Into The Other Worlds With Epic Music 5 min read