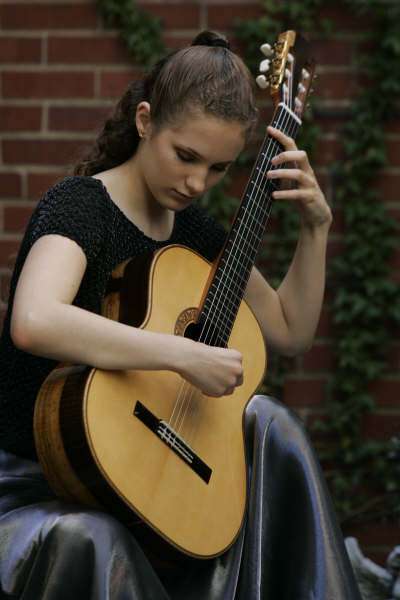 She has performed numerous solo concerts, including the New York Classical Guitar Society’s Second Sunday Series at the Roger Smith Hotel in Manhattan (sold out); Purdue University’s Discovery Series, Lafayette, IN (824 in attendance); Indiana University Purdue University Indianapolis, Indianapolis, IN; and has been featured on National Public Radio’s From the Top with Maestro JoAnn Falletta and the Buffalo Philharmonic, Buffalo, NY.  A full listing of her recent performances are included on her website.In 2010, she was honored by the Indiana State House of Representatives for  her many accomplishments in the world of classical guitar with best wishes for future success and many thanks for her contributions to the Indiana art community.  During the week of August 2, 2010 she was a featured soloist for American Public Media’s Performance Today, which is broadcast on 245 public radio stations across the country and is heard by 1.3 million people each week.

Chaconne lives in Lafayette, Indiana and studies privately with  Denis Azabagic  and Anne Waller in Chicago.  She has studied privately or received masterclasses from Eliot Fisk, Sergio Assad, Adam Holzman, Lorenzo Micheli, Jason Vieaux, David Tanenbaum, and many others.  Her concert-quality classical guitars include the 2004 Thomas Humphrey Millenium Thunderbolt and 2004 Tom Blackshear.  Ms. Klaverenga has recorded two CDs which are sold world-wide and endorses for Oasis Humidifiers and Accessories.

We had an email interview with Chaconne.

Q1. Going back to your childhood, tell us how you got attracted to music?

My parents own a music store and they teach there. I wanted to do music so they taught me first for many years before I went to other teachers when I got really serious about it. I started piano at age two with my mother and guitar at age 6 with my dad.

Q2. How it came that you picked up guitar as your instrument?

My dad plays the guitar, and I liked how it sounded.

Q3. Tell us about your training and how stringent it has been. Did you feel you missed the usual activities that a child or an adolescent would like to do?

I spent a lot of time practicing but I also had free time to do things that I liked. I was pretty good about practicing and I usually wasn’t forced to do it. I did miss out on some things that normal kids have, such as sports or dances, but I don’t regret that. I was more interested in other things. 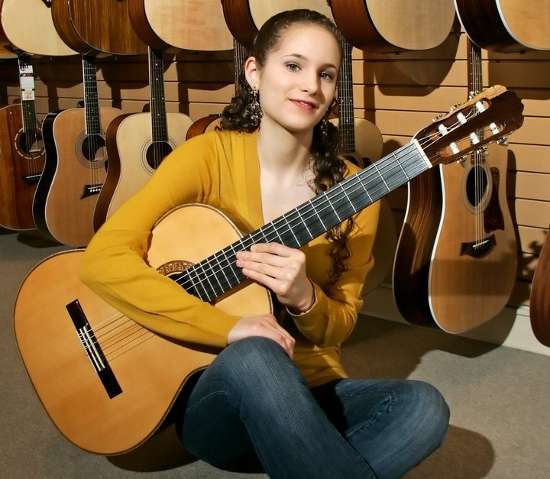 Q4. Given that you have won many competitions and prizes, how do you feel it adds to your confidence as a musician?

Going to competitions gave me a lot of experience, especially with stage presence. I felt more comfortable being on stage after competing for a few years.

Q5. You have also recorded two CDs of your music. Tell us your experience in the studio as compared to performing live before the audience.

Recording is much different from performing to me. There is no audience (unless you consider your sound engineer to be one), it’s pretty informal (wear anything), and you play the same piece over and over again. There isn’t the adrenaline that comes with performing, so it’s a little harder for me to record, but you get to play it over again.

Q6. Share how does it feel to be able to create music at such a young age? In present-day context when the youngsters have so many distractions to pursue something creative, what keeps you going?

The only difference being younger and right now is that my playing is more mature, I think. I can understand it better and I have a better grasp of what I’m doing. I’m more comfortable with it because I’ve been doing it longer. The need to be a better performer is what keeps me going. I always want to get better, and make my mark in the music world.

Q7. How do you feel music has helped you as a person and helps you in keeping your mind in a controlled state? Do you feel it has something particularly related to your personality in life?

I does keep my mind in order, in a way. I don’t think I’d be as creative if I didn’t have any music. 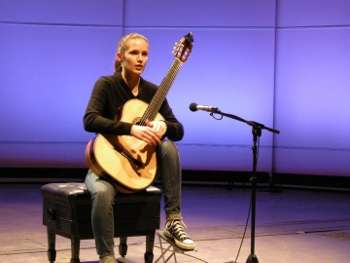 Q8. Would you like to tell us about your instruments and other tools?

I have the 2004 Thomas Humphrey Millennium Thunderbolt and a 2004 Tom Blackshear. I use both for concerts.

Q9. Apart from music, what else keeps you occupied?

School keeps me busy. I also run my parent’s website, and I used to do some teaching but not as much anymore because I’ve been busy with concerts.

Q10. Having your parents as musicians, do you feel it adds to extra burden of expectancy? How has been the relationship in terms of music apart from the family perspective?

Sometimes, but they help me with my music. They will point out things I didn’t see, and they know about the business. They manage my career.

Q11. Being so young but pursuing the classical format, do you foresee that you could go for experimentation and collaboration with artists from different genres of music in future?

I’m not sure. I don’t have anything like that coming up that I know of, but I never know what will happen in the future.

Q12. Share the best moment that you have as a musician.

I like it when I win competitions and have good concerts, or I nail a really hard part on a piece.

Q13. Share a message with our readers, music enthusiasts and budding guitarists.

Enjoy what you play. If you don’t enjoy it, it comes out in your music. If you hate a piece that you have to play, find one thing that you don’t find so bad and focus on that.