Tim Flood plays music from and for the soul. A versatile multi-instrumentalist with a special love for the guitar, Tim has been making music for more than 20 years. Tim creates and performs original compositions influenced by his love for nature, people, yoga and Love itself. He recently recorded and released a new EP, “All Beauty Surrounds.” When he’s not making music or practicing yoga, Tim can be found riding the waves and loving the Earth.

We had an email interview with Tim

Q1. Tell us something about your early life. How and where you grew up and how you got inclined towards music?

I was born in Alaska and when I was about a year old, my family moved to San Diego, CA and that is where I grew up. I developed an appreciation of and inclination towards music at an early age. There was always music playing in our home. My family had a small electric organ that I loved to play on and explore the sounds that it made. As a young child I decided that I wanted to play the drums.

At the age of 7 I announced my desire to play the drums to my parents. In response to this request, they gave me a trombone. It had been my oldest brother’s instrument. A music teacher came to my school once a week and so I began to learn the trombone. I enjoyed playing it for about a year, but it was somewhat difficult for me to play as the size of the instrument was large and cumbersome for a child my age. My arm was not long enough to extend the slide even halfway. The next year of school I switched to the trumpet, but I found even more difficulty in the transition to this from trombone.

As I began junior high school I was finally given permission from my parents to study the drums. On the first day of class the music teacher asked each student in turn what instrument they wanted to play and by the time he got to me there were already 13 drummers! The teacher said he thought that I looked like a saxophone player and he brought out a tenor sax for me to try. One honk and I was hooked! I played the saxophone throughout junior and senior high school in marching band, concert ensembles, and other school bands.

Q2. What was the main reason you picked up guitar as your instrument?

During my last couple years of high school I was finally able to study the drums. At the same time I began to take an interest in the guitar. My oldest brother was playing guitar at the time and when he would come to visit the family (he had moved out many years prior) I was fascinated by his guitar and his playing. I also had many friends who played. I continued playing sax and drums in the school bands and began to explore the guitar on my own. I soon discovered that with the guitar I was able to combine the single note playing I had learned from sax with the rhythms I learned from studying percussion, as well as add harmony into the mix with chords. It was like having an entire band right there in my hands and I fell completely in love with the guitar.

After my years spent in school playing within the formal structure of various ensembles I felt very free to do my own thing on guitar and I began exploring and composing almost immediately. Many other instruments have come and gone through my hands over the years, but guitar has remained a constant companion and source of inspiration.

Q3. During your formative years or when you were learning guitar, which musician influenced you most and why?

I remember the first time I heard The Venture’s version of Johnny Smith’s tune “Walk, Don’t Run” I decided I wanted to learn to play the guitar, to learn to play that song. I think I was about 14. My influences for guitar drew from many different sources, from rock to jazz to Sousa marches and classical. Some guitarists whose playing and songwriting caught my ear early on are: Jerry Garcia, Neil Young, John Frusciante, Frank Black, Michael Hedges and of course my brother who was also the source of my first couple of guitars as well as that old trombone that had started me on my musical journey.

I never sought to emulate anyone in particular though. I always wanted to do my own thing. It seemed that all of my guitar playing friends were busy learning Jimi Hendrix or Metallica songs while I was perfectly happy sitting in the dark on the beach improvising to the rhythm of the ocean. 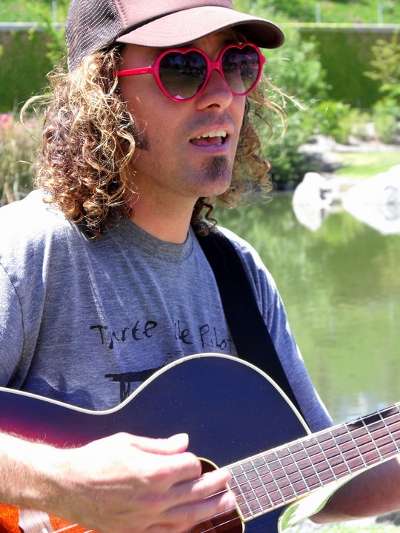 Q4. Talking about music, how you felt it has a deeper significance for human psychology through yoga, meditation etc?

Music can be very meditative, for both the listener and the musician. The vibrations created by music definitely influence the energetic vibration of the body. Music has the potential to be very healing, a wellspring of renewal and deep connection to source. When I am playing music and am able to tap into that deep meditative space it has a very profound physical and mental effect on me. Thoughts recede from the mind and a peaceful openness consumes me from within. I feel music come through me at these times, no longer consciously deciding what to play but rather acting as a conduit of energy manifested through sound.

There is a fantastic yoga community where I live and I am blessed to have the opportunity to perform live for many yoga classes. As the energy of the students transforms throughout the class, so to does the energy of the music. Each continually informs and inspires the other. It is a great honor for me to serve community in this way.

Q5. Tell us something about your own inclination towards Yoga. How you came to know about it?

I was first introduced to yoga through a close friend of mine from Spain while he was living in the USA. At the time I had little faith or trust in anyone and anything. I was constantly consumed with loud, erratic thoughts and I could not quiet my mind. I sought refuge from the dizzying whirlwind of my thoughts. I often spoke with my Spaniard friend of my desire to find this peace within, at his suggestion I attended a yoga class with him. The experience was profound to say the least!

Yoga felt as if it was something that I had always known. Nothing about it felt foreign or new. In time and with dedicated practice, my heart began to open to the beauty of life and love. I learned to meditate and I discovered a peaceful existence that became my new normal. I also discovered a deep connection of faith in the divine as well as pure love for myself and for all beings and things. I remain in deep gratitude for these blessings and for the teachers who have helped me to discover this path.

Q6. Given the fast and furious nature of present generation, do you feel the soulful music can tame the mind of youth and make them more controlled and perhaps constructive?

I do feel that soulful, peaceful, meditative music has the potential to tame the mind. So long as one is open to it. It is my hope that the music I am blessed to be able to share connects to the listener in a way that enables them to find peace, to heal or simply inspires some joy.

Q7. How you collaborate with other musicians? Do you feel different musical instruments brings wider repertoire to the music piece?

I enjoy collaborating with other musicians very much, especially when purely improvising. Different combinations of instruments definitely inspire new realms of musical discovery. Even when I get together with another guitarist it inspires me. I find it fascinating to observe their approach to playing the instrument and their inclination towards particular music or techniques. In fact, nothing has pushed my own musical progress further than playing and performing with other musicians. I feel it is an important aspect of learning. You got to jam, y’know?

I welcome the opportunity to travel and perform more, both locally and internationally. I am looking forward to touring Australia, India, Indonesia, Japan and Europe. Sharing music resonates with me on such a deep level. I feel that with music I have a means to connect with people and inspire them and their journey. In turn I would love to connect with those who inspire me and my own journey.

Q9. How your music shaped your own personality down the years?

Throughout this life music has been my constant companion and dear friend. My love and gratitude for it has never waned. In the worst of times it has brought me up, lifting my spirits and salvaging my soul. In the best of times it has been my joyful dance partner. Music is the wordless poetry of the soul. I don’t know how I could have lived without this means to discover and express myself through it.

Q10. Any advice to the young and budding guitarists and our readers?

To the young guitarists:

Play your instrument every day and never stop learning! Each day you will get better, or you will get worse but you will never stay the same. If you feel that your playing has plateaued, look to a new musical form, find a teacher or friend to jam with or try to discover a new approach to your instrument. Perhaps most important of all though, have fun!

To the rest of our readers: