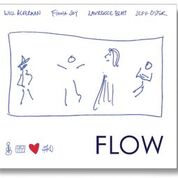 Music takes you to places! As a listener, one often feels transported to a different realm–a memory of a favorite place, a taste, an incident, an emotion or a recollection of something that moves one’s soul. What I often wonder is what conspires within the heart and mind of a musician. How do they deal with the overwhelming psychophysical feelings of creating something so dynamic, vibrant and fluid? Do they drink a lot of water? What happens during the process of creating music? Do they benchpress some weight or read poetry?

Well, as far as I know, it is like fuel of the soul–something on which an artist verily survives. They receive vibes from the universe and emit them layered with their own branding–versions of their own understanding of what the universe sings to them. Every bird (read artist) has its own unique song.

But it is very rare to find multiple artists coming together to exercise free-will yet create something so singularly unique. The collaboration between Fiona Joy (FJ), Lawrence Blatt (LB), Jeff Oster (JO) and Will Ackerman (WA) resulted in a phenomenal album “FLOW”. The album transmuted their individual brilliance into a shining jewel. The success of their album “FLOW” speaks for itself and it continues to garner excellent reviews.

Trying to get into the mix, we had an email interview with the whole group. 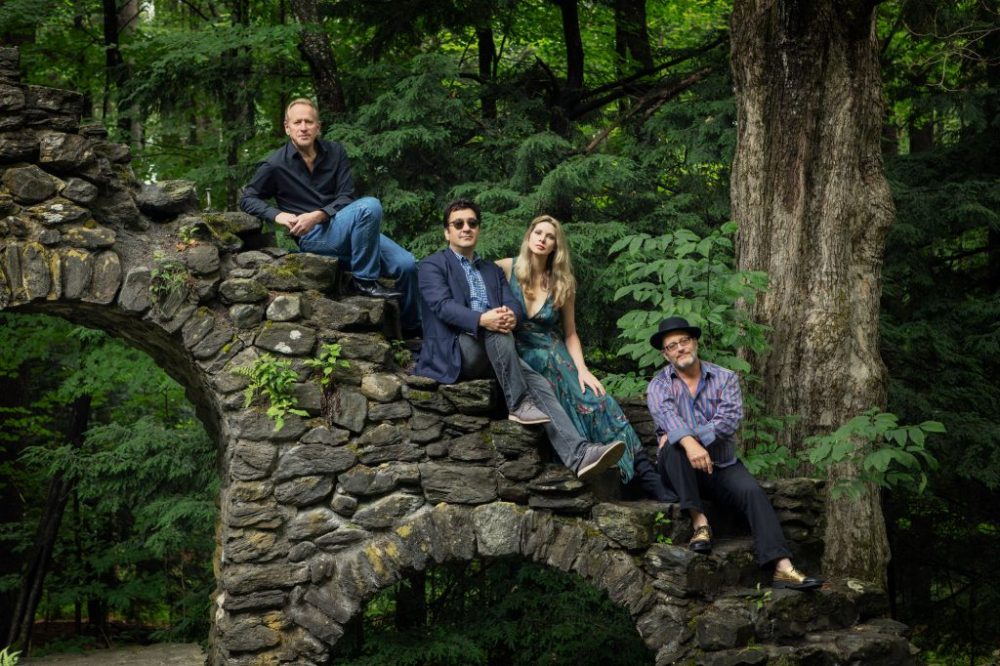 Q1. You have created music together earlier too–what was different while doing it for FLOW?

FJ: Before FLOW, we were recording and playing on each other’s projects—meaning that the project belonged to the solo artist. This time it was the four of us together and that was something totally new. It took us all outside our comfort zone into the new and lesser-known world of collaboration… it was then that we discovered that FLOW had something unique and special that didn’t belong to any one of us, but rather, to the four of us.

LB: In the past, when we played on each other’s albums, we clearly added layers to the distinctive voices of each of our solo albums. In the end, our goal for FLOW was to create a unique voice that was reminiscent of each of our solo performances, while distinctive and recognizable. I am proud to say that we truly achieved that goal creating a new sound that will also be FLOW.

JO: This was the first time that all of us got together with the intention of creating ensemble music. Most of our previous experience working together had been doing recording sessions adding our music to one of the other members of FLOW’s albums. The combination of the four of us, and our unique sounds and styles, guided by Tom Eaton and Will Ackerman, led to the unique blend of music that is FLOW.

Q2. Did it feel a little limiting in terms of creativity because you all are leading artists on the album?

JO: Actually, quite the opposite! Each of us had the freedom to bring our own creativity to each song, without limitation. The entire purpose of the album, in my opinion, was to fully bring forth the unique voices that each of us has, that we have developed over the years in our own solo career. The discovery of the unique new sound that is FLOW, as we combined our voices together was one of the most beautiful aspects of this entire project.

WA: I had never been “produced” in my life. I had always been in sole charge of my own music. If someone was going to play another instrument, they had to play after my guitar part was done, and I’d be the arbiter of what the other instrument should sound like. My own career was certainly about my music, but my principal work was in finding and signing and producing new artists…George Winston, Michael Hedges, Liz Story, and about 25 others. With these artists, with whom I hopefully worked democratically, I was still “the producer.” With FLOW, we were all producers to some considerable degree. I would bring a piece to the group and I’d experience what I had always done with other artists…my music would fundamentally change with the creative input of Lawrence and Fiona and Jeff. These friends would go into the DNA of my piece and rearrange it to some considerable degree. This was a new experience for me and initially somewhat threatening. At some point, I realized that this is what actual collaboration IS and it was then that I realized how utterly unique FLOW was and how fortunate I was to have 3 friends to work with who I admired and trusted.

It’s rather a joyful thing to have a new musical experience after 42 years as a professional musician. The music on FLOW is truly collaborative and none of us could have done this by ourselves. FLOW is uniquely FLOW and has its own musical identity. I’m very proud of it.

LB: Actually, for me, the process was liberating. As a solo artist, you need to worry about carrying all aspect of the track including both the rhythm and melody. For FLOW, we left our egos at the door and at the time we all play supporting roles and at other times the lead. The two best examples of this are on the tracks “And the Sky Was” and “Whisper Me This.” Each member of the band plays both a supporting and lead role making handoffs throughout the track.

FJ: Yes, it was liberating that we discovered FLOW had its own sound. It was only because we gave our contributions up to the group that we found something new and unexpected. It’s as if our own expectation of the music was limiting, and the group direction was far more expansive. I think that is why FLOW works so well.

Q3. Did you JAM or write music in advance to develop the pieces?  How did you know when it was time to finally record them?

LB:  The writing of the music that appears on the FLOW album was truly an organic process. Each of us brought a few song ideas into the studio and then as a group, we began to deconstruct and reassemble each piece so that in the end, we all were joint composers for all of the tracks that appeared on the album. For us, it demonstrated that we could truly function as a group that was unique and distinct from our solo voices.

JO: Once we arrived at Imaginary Road, we began working together on each of the songs, and they became transformed as we all added our contribution. The end result has been more than any of us had expected, and it truly does feel that FLOW has its own unique sound, one that is greater than the sum of the parts.

FJ: I felt as though the minute we discovered the combination of new notes or a new sound, the record button needed to go down. We didn’t rehearse; the arrival of new music was a very organic and natural and we were able to capture that very quickly. 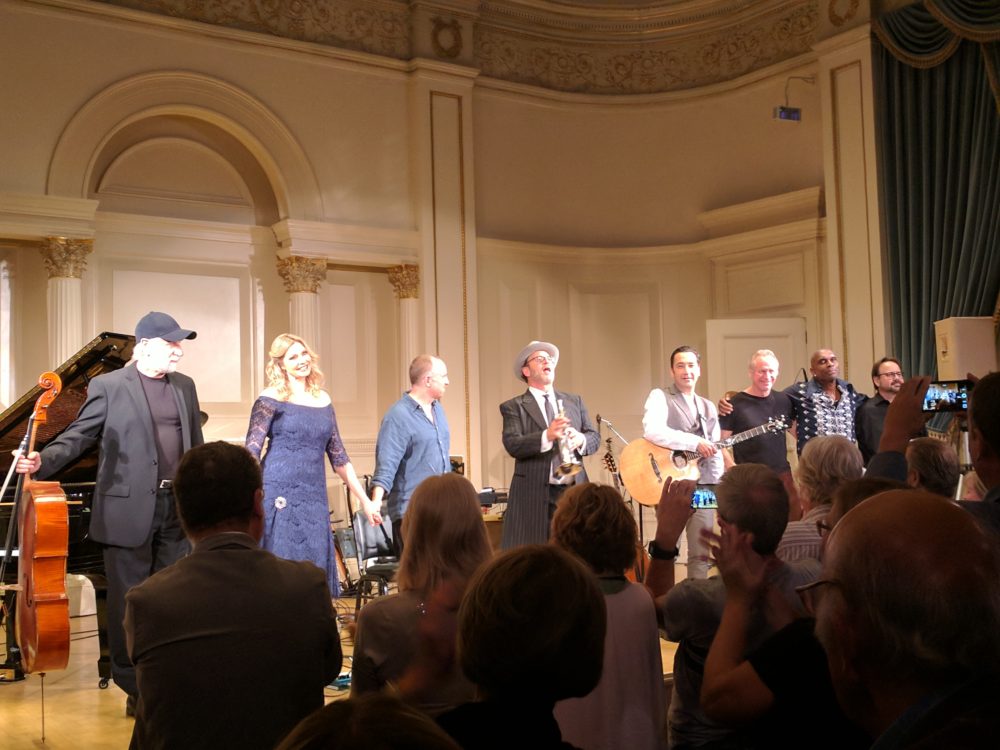 Q4. How important was the name in connection with the music…was it a catalyst?  You could have come up with WOLF or FOWL (wink).

JO: The name came actually quite easily. Yes, it definitely captures the feeling of the music, and it very much captures the process of creating it. I do think, however, that the music exists independently of the name. The inspiration for all of the music came from each of us, and I suppose we all tap into a kind of flow naturally.

LB: …and it was symbolic of how the music seemed to form a natural equilibrium as each of us made our contributions to each track. We didn’t spend a long time thinking of the name as this felt right to all of the group members from the inception. Perhaps we can do an alter ego deep chill album as the band WOLF…

Q5. After being independent artists for so long, what is the take away for you so far?

JO: Well, it certainly takes a bit of a give and take, and of compromise, to make a group like this work. Each of us have been used to being the masters of our own domains, and to make allowances for each other’s opinion, and to allow and surrender as we work through not only the recording, but the marketing, and the tours, and everything associated with the message we are wanting to share, has been quite an adventure.

FJ: That there is magic in like-mindedness, trust, and friendship.

LB: It is a joy to play music with good friends and with such accomplished musicians. Playing in an ensemble is much different than performing as a solo artist as it requires a form of giving that is unselfish and very fulfilling. We have learned much about each of our distinct musical styles and all of us have grown as musicians from this experience.

Q6. Did you feel enriched by the experience, and do you want to repeat it in future?

LB: The experience has been both challenging and very rewarding. At times, our friendship was taxed but in all cases, we emerged stronger, wiser and closer as friends and as musicians.

FJ: To me, the music is golden and something that is quite worthy of repeating.

JO: This has been quite a learning experience for each of us. I think that we’ve grown in ways we had not expected, and working together has been really quite a joy, especially as we have performed this music in a live performance setting. We look forward to sharing this music on tour in May, and again at Carnegie Hall in September, and we look forward to sharing it with the world in every way possible!

WA: We all felt that we had exceeded our wildest dreams in terms of what a wonderful synthesis FLOW became. FLOW is a recording none of us could have created on our own. Speaking for myself, a new experience after being a recording artist for 42 years was an exhilarating one. Having then experienced the joy of playing together and seeing and feeling the audience’s response very much corroborated my belief that we had created something magical and unique. I think we started talking about a new recording after the first concert at Carnegie Hall. Having the audience completely validate our creation was and is utterly inspirational. Who wouldn’t want to have more of that feeling???